Prior to 1991, the Baltic States had long suffered from precarious sovereignty. In the early years of the 20th century, Estonia, Latvia, and Lithuania had gained recognition as independent nation states by the Soviet Union, only to lose it in 1939 after the signing of the Molotov Ribbentropp Pact. Over the course of World War II, these states were subjected to Nazi rule, only to fall back into the hands of the Soviets in 1944 (Siegelbaum). During the Soviet’s rule over the region, the Baltic States were subjected to Moscow’s imposition of a communist framework on all levels of society. Despite this imposition of Soviet culture unto these states, the people of Estonia, Latvia, and Lithuania held on to their unique Baltic identities. When the moment was right, the people of these nations united in acts of civil disobedience that ultimately brought them independence.

In 1986/87, Soviet Premier Mikhail Gorbachev introduced the policies of Glasnost (openness) and Perestroika (restructuring) in the Soviet Union (Dr. Nelson). These policies resulted in  a newfound sense of freedom among Soviets and those under Soviet Rule too. This newfound sense of freedom quickly found ground among the Baltic Nations, where protests began to break out in 1986 and 1987 over pollution (Siegelbaum). These quickly sparked larger and broader protests against Soviet ideals and secrecy surrounding the Nazi-Soviet Pact.

The cause behind these  protests was best described by the then current Chairman of the Estonian Presidium, Arnold Ruutel, in an interview transcribed in the  Current Digest of the Soviet Press.  In the interview, Ruutel noted that the reason these protests were gaining so much ground was that the people of the Baltics felt that:

“The time [had] come to rid ourselves of the burdensome yoke of distrust, which hinders us and makes it difficult, and perhaps impossible, for us to move forward…this is impossible without an honest and complete revelation of the historical truth, a revolution that we, the Baltic Peoples, are not alone in awaiting. It is equally important for all peoples of the Soviet Union and the peoples of the entire world” 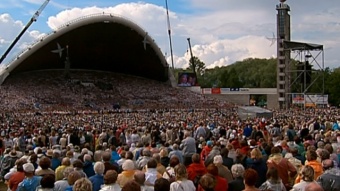 Unlike some other Soviet-satellite states where protests became violent, the Baltic States took a different route. In Estonia and Latvia, civil disobedience became the weapon of choice for defeating the Soviet superpower and regaining independence. Events such as the 1988 Tartu Pop Music Festival sparked a new era of openness about national pride among Estonians; at the festival, people came together, held hands, and sang national songs (Reinbold). In the following months, the Old Town Festival in Tallinn and the August Summer Rock Festival brought on even more patriotism and nationalistic feelings among Estonians- This would come to be known as the Singing Revolution. It established hope not just in Estonians, but in Latvians and Lithuanians as well. It gave them hope that that they might be one day again be able to regain their independence and celebrate their cultures without fear of oppression.

As noted IN the aforementioned  Current Digest article, on the 50th anniversary of the 1939 Molotov Ribbentropp Pact, hundreds of thousands of citizens from Estonia and Latvia  formed a human chain stretching 600-km as a form of peaceful protest (as seen below). This was done in protest of more transparency from the Soviet government on the terms of the Molotov Ribbentropp pact which many believed was not released in its entirety because it showed in reality that the Soviet Union had used the pact in part to annex the Baltic States (MASS ACTION IN THE BALTIC REPUBLICS).The chain, along with the ongoing “Singing Revolution”, sparked a wave of nationalistic and patriotic sentiment that led to reformist parties in the Baltic States. These parties worked together to establish acts of civil disobedience and challenge Soviet influence over their nations (Reinbold).  Two years after the formation of these parties and the continuing  acts of civil disobedience,  Lithuania led the charge to Baltic independence by declaring itself an independent state. Given the unforeseen effects of Glasnost and Perestroika on the foundation of the Soviet Unions rule, Gorbachev had little he could do to stop Lithuania from becoming independent. Lithuania’s declaration of independence from the Soviet Union encouraged Estonia and Lithuania to seize the momentum of their independence movements. In August of 1991, both nations declared independence and once again become free independent states, effectively ending Soviet control in the Baltics (Siegelbaum).

(1989, September 20). MASS ACTION IN THE BALTIC REPUBLICS. Current Digest of the Russian Press, The . Retrieved from https://dlib.eastview.com/browse/doc/13551229

View all posts by zaneg96

11 thoughts on “The Baltic Independence Movement”